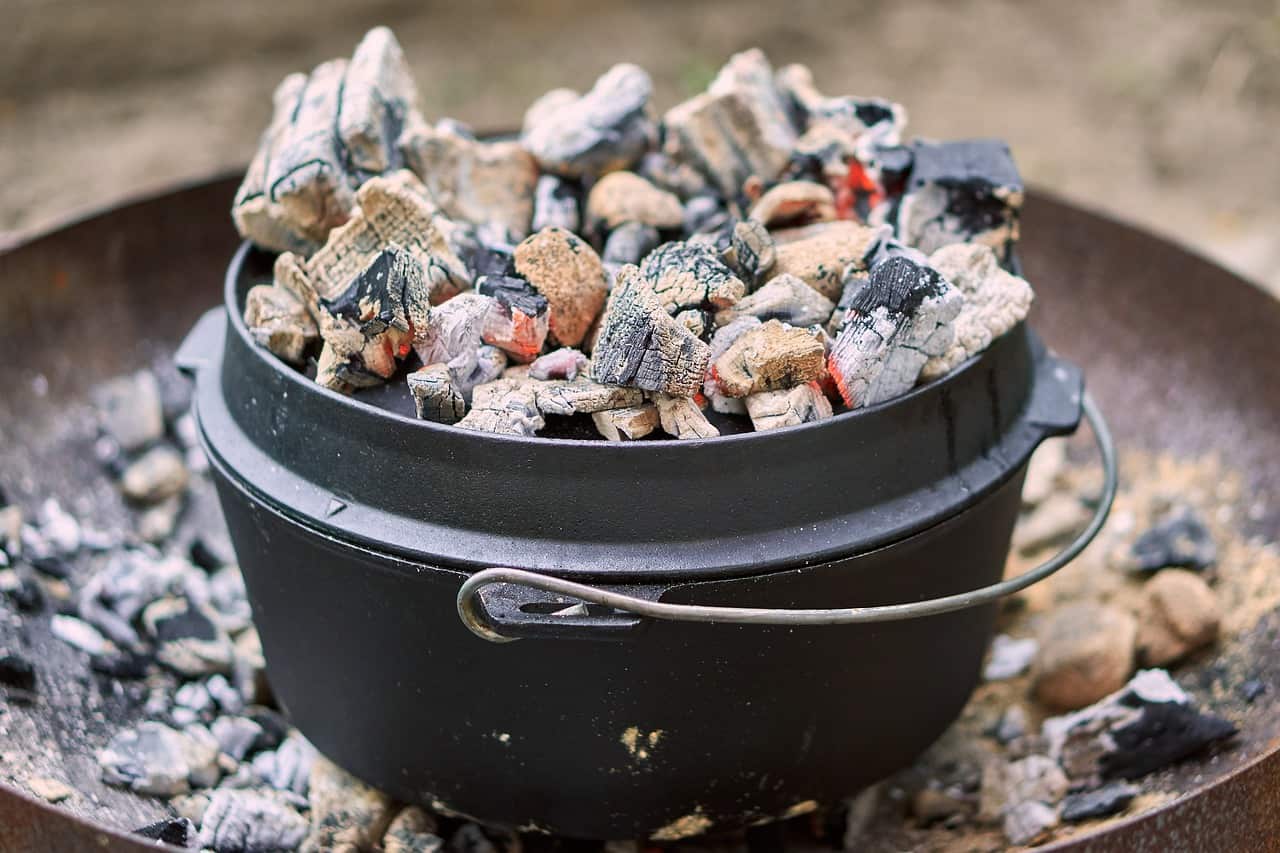 There are many choices when it comes to outdoor cookware including cast iron, stainless steel, and even titanium.

However, in my opinion, there is no better option for outdoor cookware than cast iron, thanks to its durability, heat retention, even heating, and non-stick properties.

But if your new to cast iron cookware you probably have a lot of questions.

Such as what cast iron cookware is best for the outdoors?

As well as how to use and care for cast iron?

If this sounds like you, you’ve come to the right place, as we’ll go over all these questions in this article.

So you’ll know not only what the best cast iron cookware is but also how to use and care for it to get the most from it.

With so much cast iron cookware to choose from, it can be hard to know which pieces are the best.

So to help take the guesswork out of picking outdoor cast iron cookware, we’ve highlighted our top picks below.

One of our favorite pieces of cast-iron cookware and one every camper should have is the iconic Lodge Cast Iron Skillet, as it can be used to cook just about anything while cooking outdoors and over a campfire.

Which is why we recommend this piece of cast iron cookware more than any other, when first starting out using cast iron. 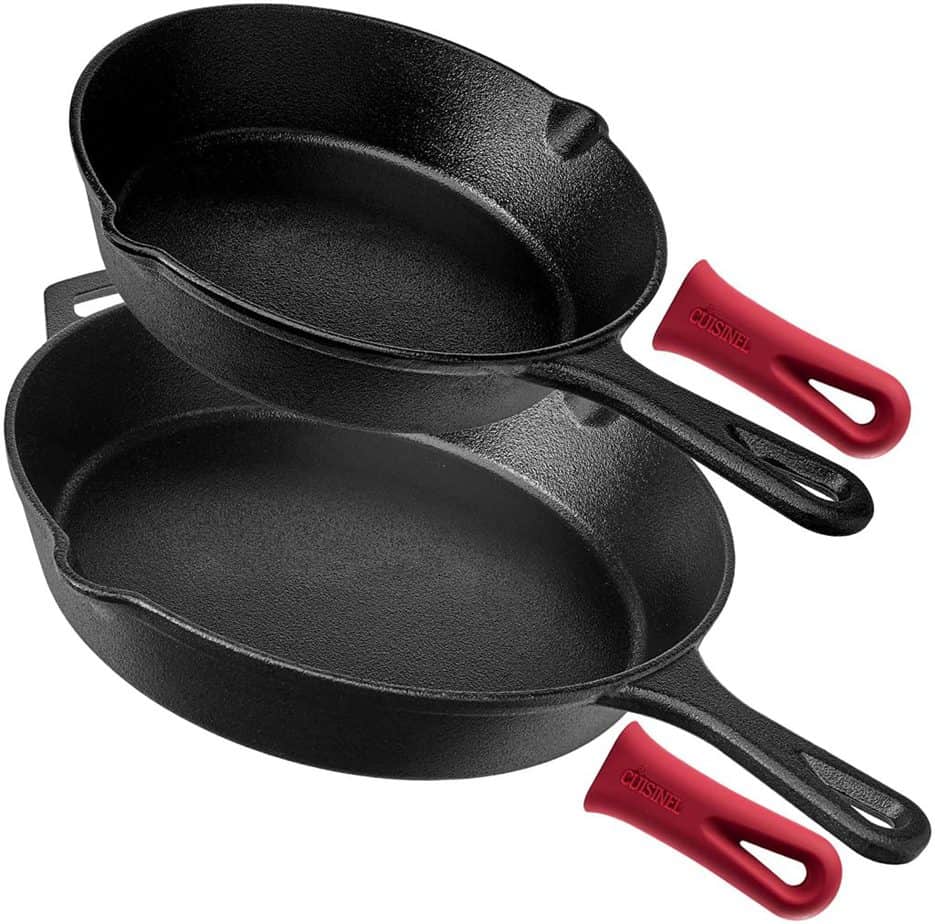 The Cuisinel cast iron skillet, in another very popular piece of cast iron cookware, thanks to its premium quality, excellent durability, and affordable price.

And one of the best ways to buy the Cuisinel cast iron skillet is by purchasing the Cuisinel Cast Iron Skillet Set, which includes both an 8-inch and 12-inch frying pan at one affordable price.

Allowing you to cook a wide variety of foods, all at the same time, while cooking outdoors. 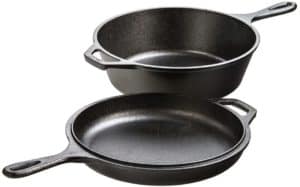 The Lodge Cast Iron Combo Cooker is one of the most unique pieces of cast iron cookware on this list.

And only second in popularity to the stand-alone Lodge cast iron skillet from above.

As this versatile piece of cast iron cookware can pretty much cook it all, thanks to its two separate skillets that can be put together to make a 3.2-quart dutch oven.

Allowing you to fry, grill, and sauté meats and vegetables with the two separate skillets.

As well as bake desserts and simmer soups and chilis when the two skillets are combined to form a dutch oven. 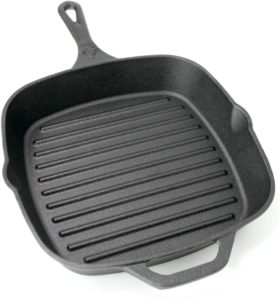 While Backcountry Iron might not be a household name in cast iron cookware like Lodge or Cuisinel, they’re definitely a brand you should check out.

As they make a wide variety of high-quality cast iron cookware, cast from premium virgin ore and seasoned with a proprietary blend of oils.

And one of their most popular pieces of cast iron cookware is their medium 10-inch square grill pan with raised ridges.

Which allows you to perfectly grill up meats, fish, and vegetables like a pro while cooking outdoors or over an open fire.

And thanks to its square shape, you have more surface area to grill on, allowing you to cook more food and prepare larger meals while cooking outdoors. 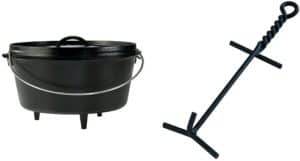 The Lodge Deep Camp Dutch Oven is essential if your planning on doing a lot of slow cooking or baking while cooking outdoors.

As this dutch oven, acts as a portable oven to cook and bake a wide variety of items even while cooking outdoors or cooking over a campfire.

This premium dutch oven from Lodge is also loaded with handy features such as a flanged lid that can hold hot coals for a more uniform cooking temperature, built-in stabilizer legs to ensure the dutch oven stays nice and level even when placed in the fire, and a stainless steel handle for easier transport.

In addition, this particular dutch oven from Lodge comes with a bar stock that can be used to lift its lid and carry the dutch oven safely during and after cooking. 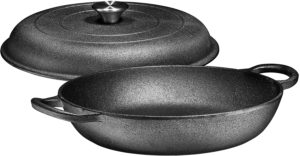 Another great piece of cast iron cookware, if your looking for a piece that can handle a wide variety of cooking styles and techniques is this heavy-duty cast iron casserole braiser.

As this unique casserole braiser can not only braise but also sear, saute, broil, fry, bake, and even roast.

Allowing you to prepare pretty much any type of meal while cooking outdoors or cooking over an open fire.

And thanks to its double handles on either side, it’s very easy to maneuver and control when cooking over a campfire. 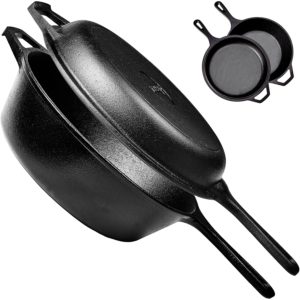 Another popular combo cooker similar to the Lodge version from above is the Cuisinel Cast Iron Multi-Cooker, which like the Lodge version comes with both a skillet as well as a deep pot that can be combined to make a small dutch oven.

Providing tons of versatility and usability to cook or bake just about anything while cooking outdoors or over a campfire. 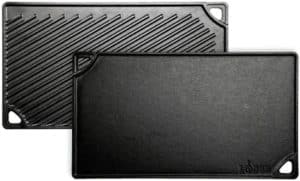 When your ready to step your game up or just need more space for frying and grilling, you definitely should take a closer look at this large reversible grill/griddle plate from Lodge.

As the Lodge LDP3 measures 9.5 inches by 16.75 inches, providing plenty of room to cook up lots of food for larger meals while cooking outdoors or around the campsite.

And thanks to its unique reversible design with a grill on one side and a griddle on the other, you have the ability to cook a wide variety of foods all with one piece of cast iron.

By using the smooth side to make grilled cheese sandwiches, eggs, sausage, or pancakes and the ribbed side to grill steak, chicken, hamburgers, fish, or veggies.

What is the Best Brand of Cast Iron Cookware?

It’s difficult to pick just one brand of cast iron cookware as the best.

As each brand of cast iron typically offers a unique set of advantages and disadvantages, which makes it either more or less suited for certain types of cast iron cooking.

Lodge cast iron is the most well-known and trusted brand of American-made cast iron cookware on the market today.

Which can trace its routes all the way back to its original foundry, which was established in 1896 in South Pittsburg, Tennessee.

But what they’re best known for is their seasoned unfinished black cast iron, which is produced much in the same way it was over 100 years ago in their original foundry.

Cuisinel is another very popular brand of cast iron cookware, which is known not only for its quality but also its affordability. 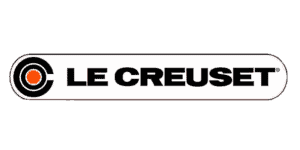 Last but certainly not least is the Le Creuset brand, which produces a wide range of cookware that is world-renowned for its high-end quality and unparalleled cooking abilities.

But regardless of the material, you can be sure that the quality and cooking ability will be second to none.

Because of the more refined and high-end quality of Le Creuset cookware, however, it’s typically best suited for indoor cooking as opposed to outdoor cooking, which is why its cookware is not featured on the best cast iron outdoor cookware list.

Must-Have Cast Iron Cookware Every Camper Should Have

As there are really only a few main pieces of cast iron cookware you need to cook just about anything outdoors or over a campfire, which we have listed below.

As the cast iron skillet allows you to fry, grill, sear, sauté and braise, all while cooking outdoors, allowing you to cook everything from meats to vegetables.

And while you can find them in a wide variety of sizes ranging from as little a 3 and a half inches across to more than 15 inches across, ideally you want to stick with the more popular sizes, which include the 8-inch, the 10-inch, or the 12-inch.

As these popular sizes offer plenty of cooking surface, while still being small enough to easily store and transport them. 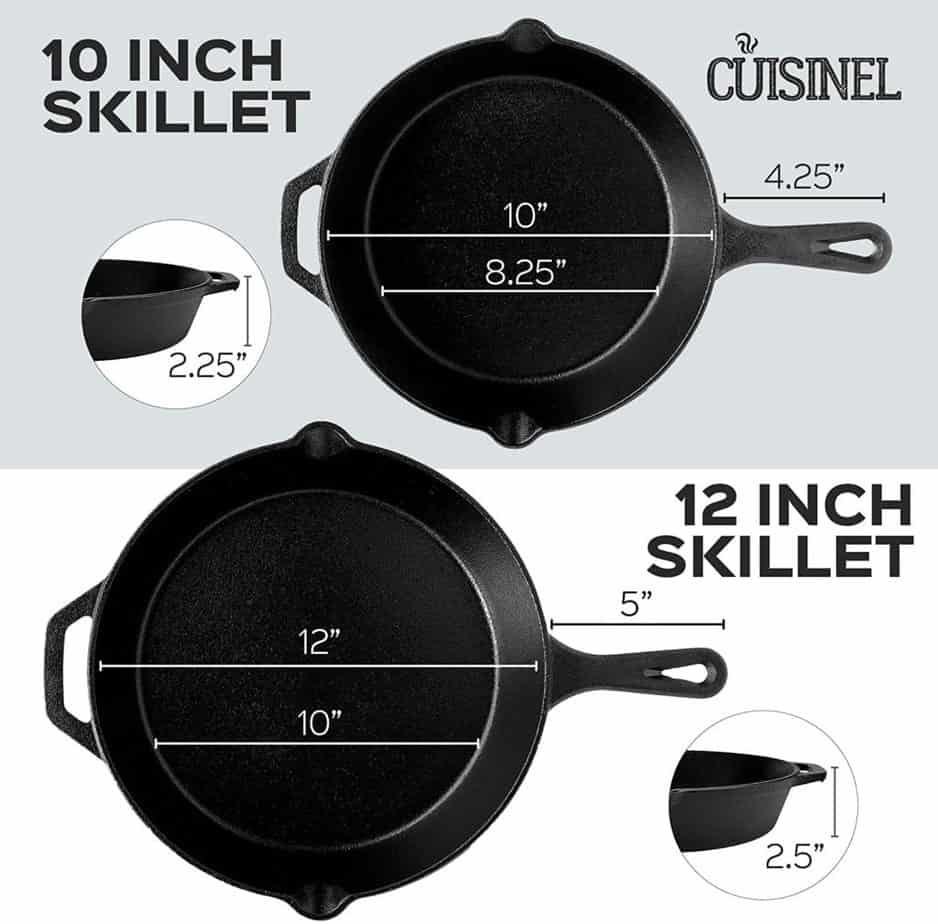 One thing to keep in mind though when picking out a cast iron skillet, as illustrated by the Cuisinel infographic from above, is that cast iron cookware is measured from rim to rim when denoting size.

So when you purchase a 10-inch skillet, the size of the skillet is 10 inches from rim to rim.

As the actual cooking surface on a 10-inch skillet is only 8.25-inches across.

Once you’ve acquired the versatile and basic cast iron skillet, the next piece of cast iron cookware that you should acquire is a cast iron dutch oven.

As this piece of cast iron cookware will allow you to cook everything that the standard cast iron skillet won’t.

Allowing you to bake bread and desserts as well as simmer hearty soups and chilis while cooking outdoors.

The last piece of essential outdoor cast iron cookware you need is the cast iron griddle, which allows you to fry and grill much like the standard round cast iron skillet does, just on a much larger scale.

Because while a standard cast iron skillet might only have a cooking surface that is 8 or 10 inches across a cast iron griddle will usually measure a foot if not two feet across, providing much more cooking surface to cook a larger amount of food.

How to Care for and Use Cast Iron Cookware

Often one of the biggest reasons why people shy away from using cast iron cookware is they think it’s too difficult to use and care for.

But in reality, cast iron cookware is quite easy to use and care for once you understand a few basic principles.

The first being that water is the natural enemy of cast iron, as it can cause it to rust.

So you always want to make sure you maintain and preserve the natural seasoning that occurs on cast iron cookware over time.

By using only mild soap or not at all while cleaning and by rubbing a thin layer of vegetable oil into the cast iron after each cleaning and before storing.

For a more in-depth explanation on how to take care of and clean cast iron cookware, check out this super helpful YouTube video.

For even more camping and outdoor cookware, check out our article “Best Camping Cookware for Open Fire and Campfires“.