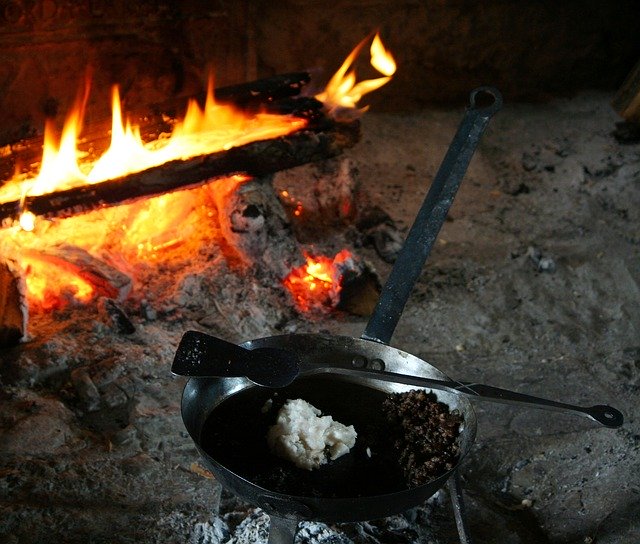 While I was on a camping trip not that long ago I thought about trying to up my cooking experience while camping as I had been hearing for years people talk about the benefits of using cast iron and how great it was.

As I had been using the same standard mess kit for years similar to this one on Amazon to prepare basic meals around the campfire.

I wondered though can you use a cast iron skillet over a campfire and is it safe?

The great news is yes you can use a cast iron skillet over a campfire.  In fact, cast iron cooking and campfires are a perfect match due to the durability of cast iron and its even heating properties.

Fast forward to present now that I have made the switch from using a standard mess kit to a cast iron skillet and dutch oven there is no way I’m going back to that old mess kit.

Along the way, though I have learned a few things about using a cast iron skillet over the campfire and how to take care of it that I think you would find helpful so I have shared this information below.

Best Ways to Use a Cast Iron Skillet Over A Campfire

Cast iron is great for cooking over a campfire but there are few things to keep in mind to make sure you have a great experience while using your skillet.

The first thing to know is that not all cast iron is created equal in fact if you go with some cheap knock off cast iron from some no-name brand it can actually ruin your whole cooking experience.

The cast iron skillet that I have been using for a while now and love is the Lodge 10.25 Inch Cast Iron Skillet that you can check out on Amazon by clicking here.

Lodge is an American institution in the cast iron industry as they have been producing cast iron cookware since 1896 in South Pittsburg, Tennessee.

So when I was selecting a cast iron skillet to start with it was easy to go with a company that has been producing cast iron cookware for well over a 100 years.

Cast iron is a great conductor of heat which is what makes it so great when cooking over a campfire.  However, to get the most out of your cast iron it’s important to prepare the fire and cooking surface for optimal results.

To begin with, when cooking over an open fire you want to cook over an established fire with a nice bed of hot coals to work with.

So if you are planning to cook over the fire its best to wait at least 15 to 30 minutes to allow the campfire to become more established.  That way when you begin to cook on it you will have a much more consistent temperature and heat to work with.

This brings us to our next point when cooking over a campfire,  which is its best to cook over the hot coals rather than the lapping flames of a campfire.

While it might be tempting to set your cast iron skillet over a roaring fire with flames reaching for the sky for the best results you want to cook your meals using the hot coals from the fire which will be much more consistant. 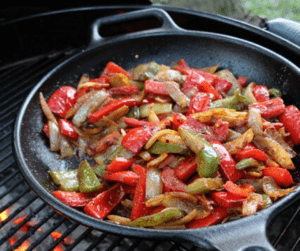 Have Everything Ready and Close By Before You Start Cooking

Use Butter Instead of Oil When Cooking with Cast Iron

While you can certainly use oil with cast iron if you choose to.  Make sure that you are being especially careful to not cause a flare-up when cooking with oil.

Cleaning Your Cast Iron After a Meal

How to Clean Your Cast Iron Skillet

What Can you Cook Over a Campfire?

Now that you know how to cook with your cast iron skillet over a campfire and the proper way to care for it.  I thought it would be an appropriate end to this article to talk about some of my favorite foods you can make using a cast iron skillet.

For me, there is perhaps nothing better to cook on when cooking meat than cast iron so I love cooking a thick piece of steak, fried chicken, or bacon on my cast iron skillet.

Also in the morning cooking up some golden hash browns and scrambled eggs can really hit the spot.

Lastly don’t forget you can actually cook up some killer deserts on your cast iron skillet including cobbler pie or even a chocolate chip cookie cake.

Curious about other types of cookware good for cooking over a campfire?  Then check out our article “Best Camping Cookware for Open Fire and Campfires“.