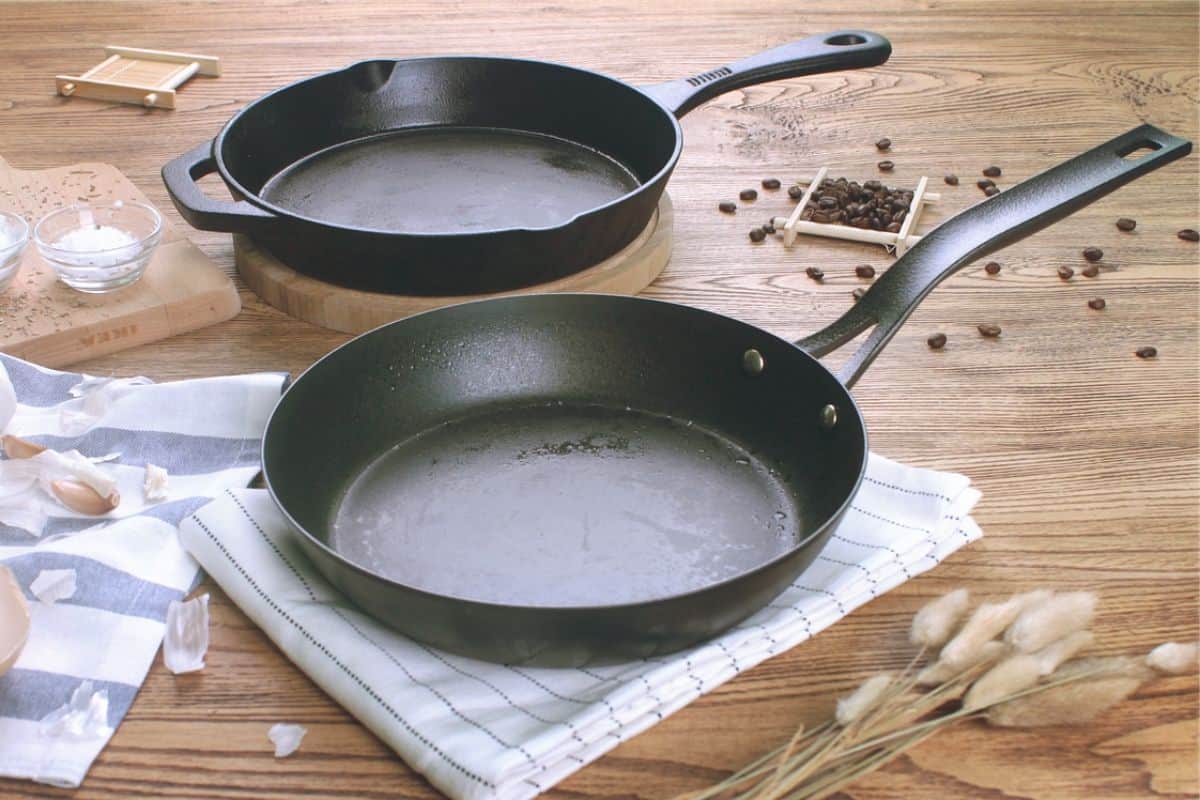 Oftentimes when first starting out beginning cooks or chefs can be intimidated by cast iron, believing it’s too expensive, too hard to work with, or just too difficult to clean.

However, this could not be further from the truth and hopefully, by the time you finish reading this complete guide to the Best Cast Iron Skillets for Beginners, you will understand that cast iron is actually quite easy to work and not any more expensive than stainless steel or aluminum cookware.

If you’re looking for a great all-round cast iron skillet for beginners, that is just at home around the campfire as it is around your kitchen, then this 12-inch Lodge cast iron skillet should definitely be high on your list.

For starters, the Lodge brand is world-renowned and has been making quality cast iron cookware right here in the USA from their foundry in South Pittsburg Tennessee since 1896.

Because of this, it’s hard to beat the 120-year heritage and history that Lodge brings to making its cast iron cookware.

This Lodge 12″ cast iron skillet is great for beginners due to its versatility and usability allowing you to prepare a variety of meals all from the same skillet.

If you’re a beginner with cast iron this will more than likely be your first cast-iron skillet or perhaps only your second piece of cast iron cookware, so when choosing starter pieces its important to choose cast iron cookware that will allow you to cook a variety of items.  And thanks to the 12-inch size and its considerable depth, this cast iron skillet by Lodge can easily cook just about any type of food.

To check the price of this quality and reliable cast iron skillet from Lodge on Amazon click here. 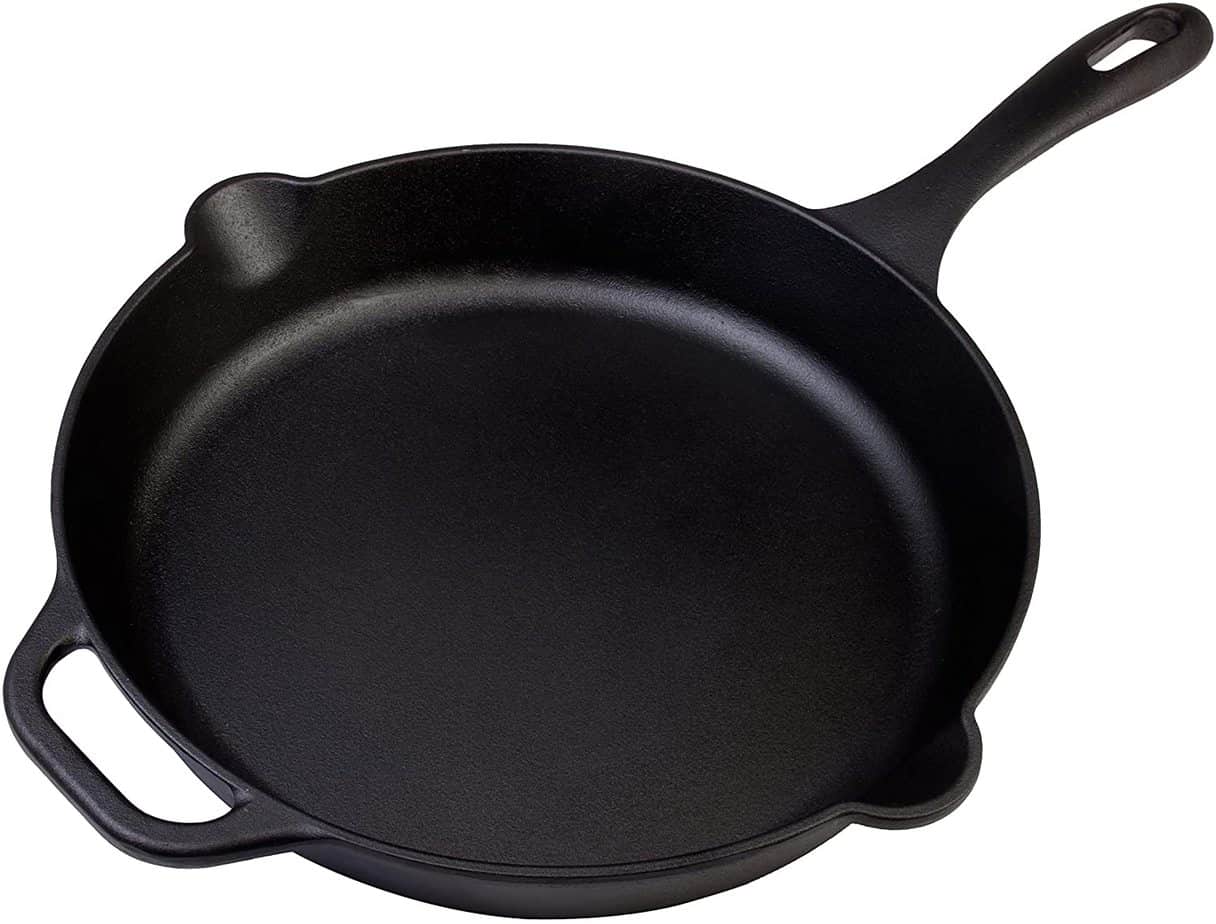 Another great option for cast iron beginners is this sturdy and reliable 12″ cast-iron frying pan by Victoria.  Victoria as is the case with Lodge has a long and proud tradition of making some of the best cast iron cookware on the market and has been doing so since 1939.

This cast-iron skillet is great for beginners for several reasons, to begin with, the design of the cast iron skillet makes it easy to work with while cooking thanks to its two-handle design and the addition of the assist handle on the front of the skillet.

In addition, this cast iron skillet by Victoria also has deep as well as steep sidewalls which help to keep the food and grease inside the pan no matter what you’re cooking.

Also, thanks to its convenient size and the cooking properties of this cast iron skillet you can easily bake a deep-dish pizza, roast a chicken or sear a steak to perfection without breaking a sweat.

To check the price of this great beginner cast iron skillet on Amazon click here. 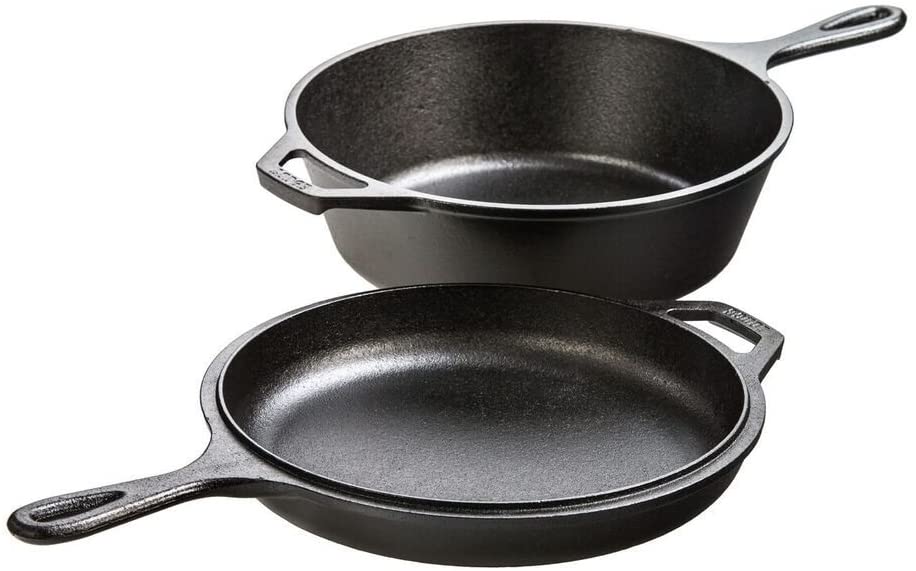 The next cast iron cookware that makes a great choice for beginners is this combo cooker by Lodge that actually includes two pieces of cookware including a large 3/4 deep skillet and a 10.25″ shallow skillet that can also act as a lid for 3/4 deep skillet.

This combo cooker is a great addition to anyone just getting started with cast iron as it gives you two very versatile pieces of cast iron cookware allowing you to cook, bake, or grill a wide variety of foods.

Lodge cast iron cookware is always an excellent choice to start out with as a beginner because their cookware and skillets are made from quality cast iron that not only holds and retains heat long after you remove it from the cooking surface but also provides even heat distribution ensuring you have continuous and predictable heat to cook over.

This combo cooker set by Lodge is also a great choice for beginners because you get two different pieces of cast iron cookware, so no matter what cookware the meal you are planning calls for this combo set is sure to have you covered.

To check the price of this versatile beginner cast iron combo cooker on Amazon click here. 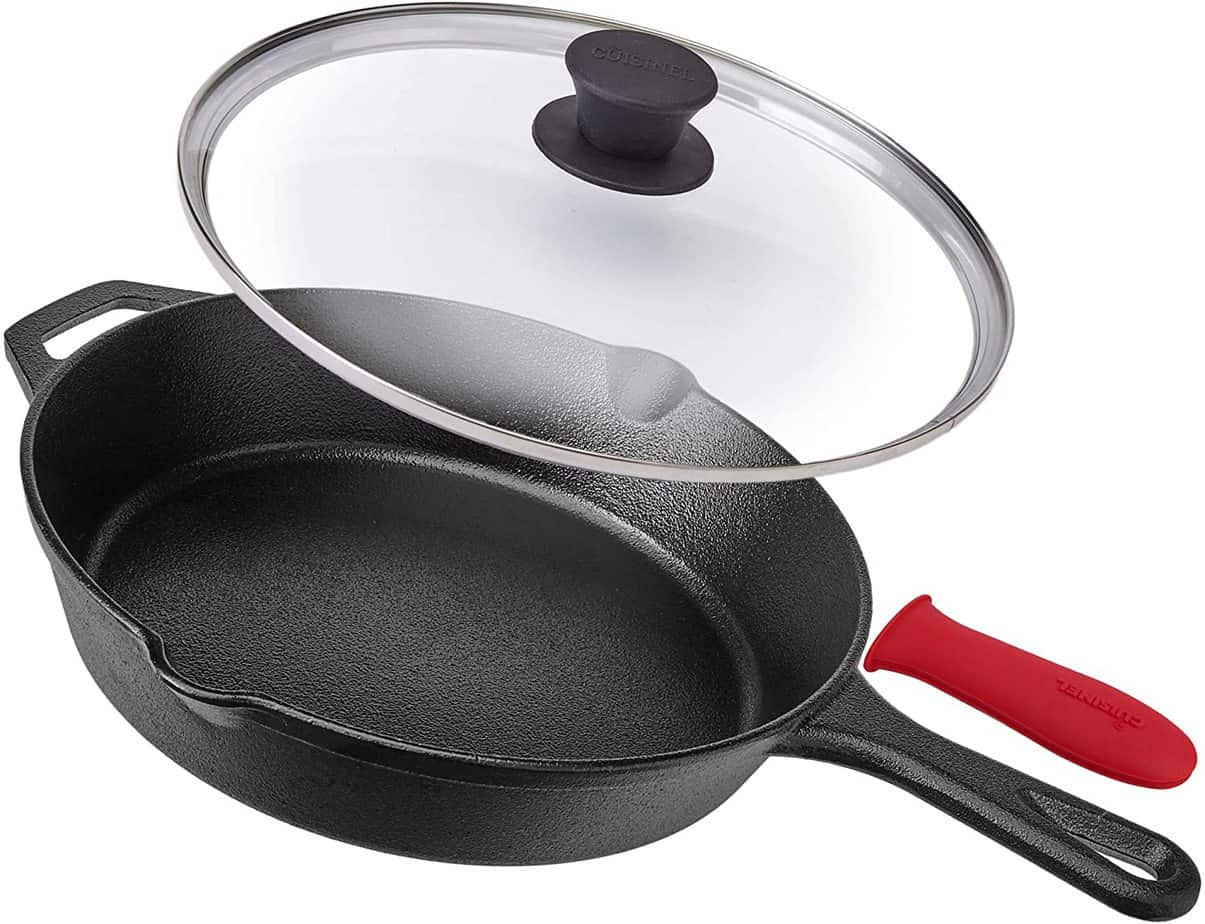 This 10-inch cast-iron skillet provides enough cooking surface for just about any meal you might want to prepare, as well as a glass lid and silicone handle cover to make cooking with cast iron as easy as possible.

This cast iron skillet from Cuisinel is great for beginners because of the versatility it offers as well as its ease of use.

For starters this cast iron skillet comes pre-seasoned, so there is no need to season the cast iron before use, allowing you to start cooking right out of the box.

In addition, thanks to its larger size, deep side walls, and glass lid you can do just about any type of cooking you could want with this cast iron skillet including baking, frying, braising, broiling, and sauteing.

This skillet also has a variety of features that make the skillet easier to use for those that might be new to cast iron cookware, such as a helper handle on the front of the skillet making it easier to control and manage the heavy weight of the cast iron and an included silicone handle cover that fits over the 4 3/4 inch main handle to help prevent burns while cooking with the cast iron.

To check the price of this 10-inch cast-iron skillet on Amazon click here.

If you want to try cast iron cookware out or working with a small budget then this basic cast iron skillet by Ewei’s is a great choice due to it’s cheap price.

In fact, this quality cast iron skillet was the cheapest price we could find for a 12-inch size skillet.

Just because this skillet has a cheap price though doesn’t mean that it’s not a good piece of cast iron cookware as it still provides plenty of quality and nice features.

As mentioned about we like this skillet for beginners because it allows a cast iron beginner the opportunity to try cast iron cooking without spending a ton of money.  And while it does not have the brand name of some of the more well known and expensive brands of cast iron cookware, it more than makes up for this with its overall quality and features.

Despite the cheaper price this cast iron skillet still has many of the same features as the more expensive cast iron skillets such as a front helper handle, large cooking surface, deep sides, sturdy construction, and pour spouts on either side.

To check the price of this affordable cast iron skillet on Amazon click here. 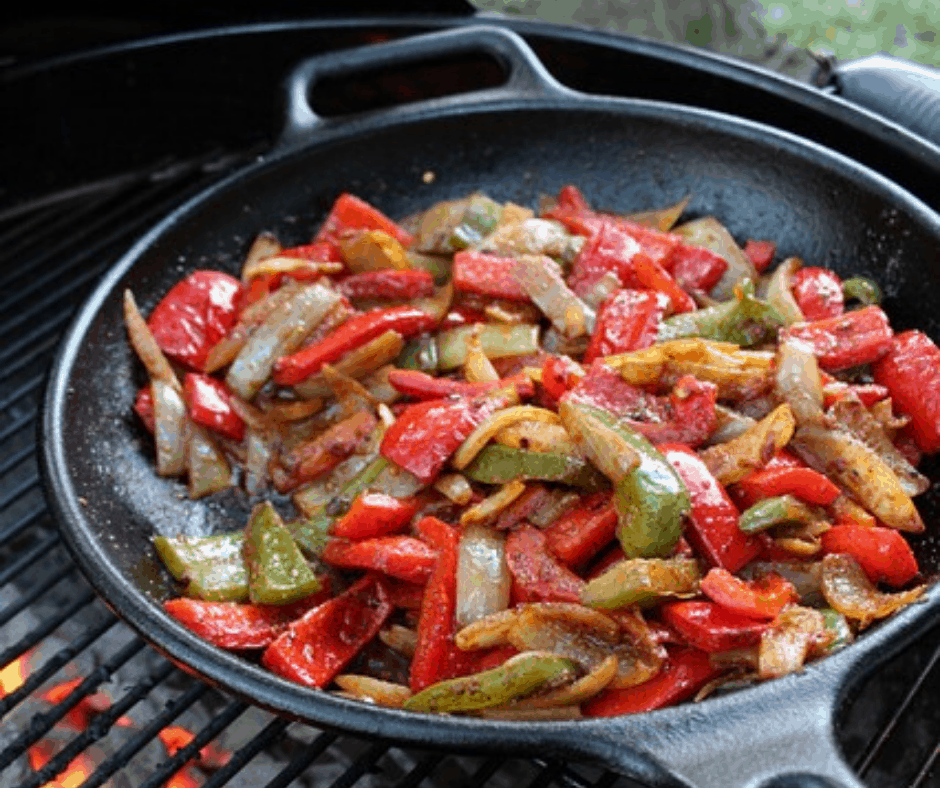 What is the Best Brand of Cast Iron Skillet?

When it comes to the best cast iron skillet brand, there is really no definitive answer.  And if you asked 10 different cast iron pros what the best brand is you would more than likely hear 10 different answers.

However, there are certainly cast iron brands that are more renowned and superior compared to other lesser quality brands.

So while this below list is not the end all be all when it comes to the best brands for cast iron skillets, if you choose a cast iron brand from this list you can’t go wrong.

What is the Most Popular Size of a Cast Iron Skillet?

The most popular size of cast iron skillet is either the 10-inch or 12-inch skillet as they offer the most versatility and usability and can prepare a variety of meals.

It’s important to remember however, that the 10-inch or 12-inch size references the distance from rim to rim across the top of the cast iron skillet and not the actual cooking surface.

So to get a better idea of the actual size of the cooking surface you should subtract 1-inch from the stated size.

It’s not all about the width of the cast iron skillet though as the depth of the skillet is also an important factor to consider when looking for versatility and ease of use as a beginner.

In general the deeper the cast iron skillet, the easier it will be to use and the more versatility it will provide.  This is because when you have a deeper skillet with taller sidewalls it’s much easier to keep the hot grease and food where it belongs which is inside the skillet.  In addition, when you have a deeper skillet it allows you to cook a much broader variety of foods and even allows you to bake in the skillet.

As a beginner, when looking for ease of use and maximum versatility, look for a cast iron skillet that is around 2 inches deep.

How to Take Care of a Cast Iron Skillet for Beginners

When it comes to cast iron cookware and skillets, one of the most common concerns is how to properly care for and clean the cast iron, but as you will see there really isn’t much to it.

While you do have to take care of and clean cast iron differently than you would more common stainless steel or aluminum cookware it really isn’t any more difficult or time-consuming.

When caring for cast iron cookware, the two main things to remember is that water is the enemy of cast iron and always make sure to protect the seasoning.

So when caring for and cleaning cast iron you want to expose the cast iron to as little water and moisture as possible and make sure you help build and maintain the seasoning of the cast iron.

Below is a list of our top care tips for cast iron skillets and cookware.