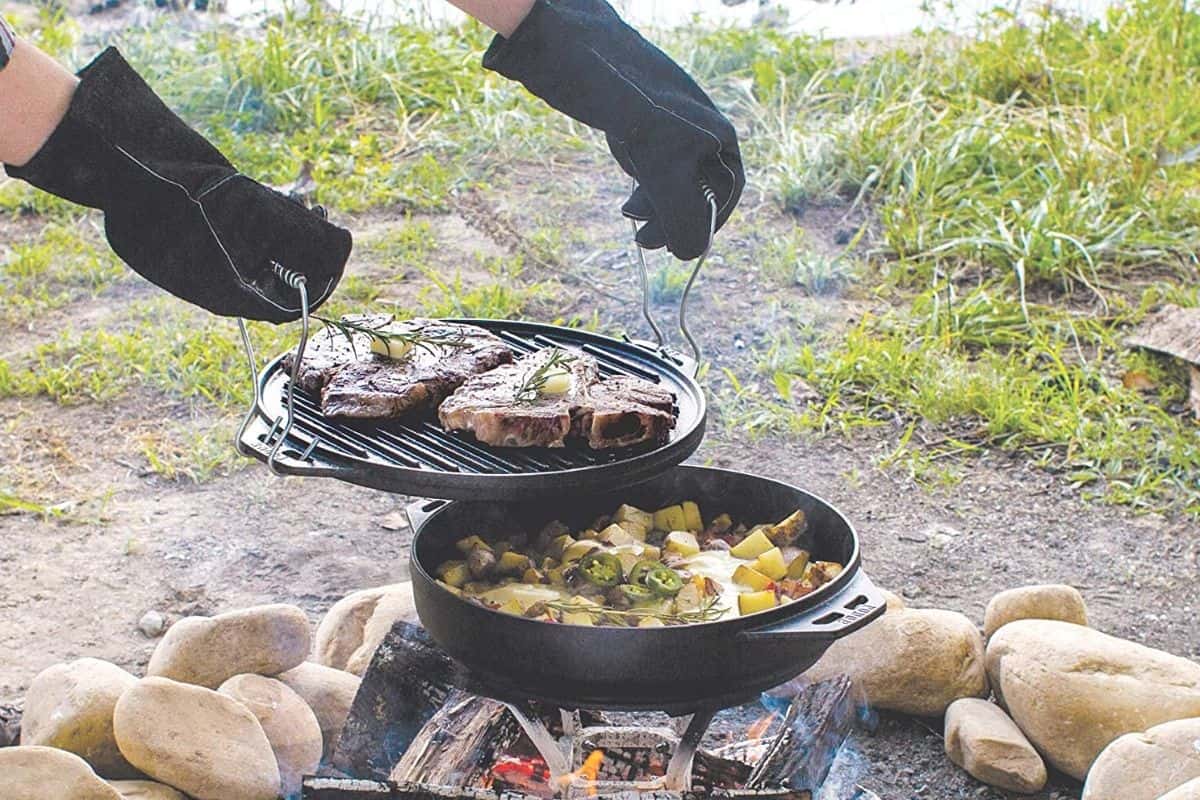 If your someone that loves to cook while camping, then we have the absolute best cast iron skillet with lid for campfires and outdoor cooking that money can buy.

This combo cooker can do such a wide variety of cooking, that this one piece of cast iron cookware can actually replace multiple pieces of single-use cookware including a skillet, a frying pan, a griddle, and even a dutch oven.

Have we peaked your interest?

We sure hope so because we really can’t say enough good things about this cast iron skillet with lid.

In our opinion, the best cast iron skillet with lid that money can buy for campfire cooking is the Lodge Cast Iron Cook-It-All Kit.  ((See on Amazon by clicking here.))

To begin with, Lodge is one of the most well respected and trusted brands of cast iron cookware in the industry.  With a long and proud history of making some of the best cast iron cookware that money can buy anywhere in the world.  And the icing on the cake, is that Lodge is an American company that makes all their products right here in the USA, in the same foundry where it all started some 120 years ago in South Pittsburg, Tennessee.

So when you buy any Lodge cast iron cookware from their skillets to their bread pans you can trust that you are getting quality cast iron and cookware that will last for generations with the proper care.

Best in Class Versatility and Usability

Perhaps the best thing about this combo cooker is it’s boundless versatility when it comes to cooking around the campfire.

If you’re wondering what you can cook with this combo cooker by Lodge, the only real limit is your imagination, as this 5 in 1 cast iron combo cooker can pretty much cook it all as the name implies.

Just to give you a better idea though of the amazing level of versatility and usability that this cast iron cookware offers, we have broken down each of its components to give you a better understanding of all the different cooking options as well as some of our favorite recipes to use while cooking with the Lodge Cast Iron Cook-It-All Kit.

The Wok at the bottom of the cook-it-all kit is the staple piece of this cast iron cookware that can be used as a skillet, a deep fryer, and even a dutch oven when you add the lid for baking.

At the top of the Wok, it measures just over 14 inches across and is approximately 3 inches deep with a flat cook bottom and slightly curved edges before tapering to a more straight sidewall towards the top.

The Wok also has two built-in arms on either side that allows the included heave-duty handles to grab hold of the cookware for easy maneuvering.

Also, some of our favorite recipes for the Wok are listed below just in case you need a little campfire cooking inspiration.

The 14-inch grill/griddle is a two-sided piece of cast iron with a grill with raised ridges on one side and a griddle with a flat cooking surface on the other.  The grill/griddle plate also acts as a lid for the cast iron Wok allowing it to be used as a dutch oven.

As with the Wok, the grill/griddle lid has built-in arms on either side to allow the included heavy-duty handles to clip on to each side for easy maneuverability.

While you can definitely place the cast iron grill/griddle plate right down into the fire and directly over hot coals, sometimes it nice to raise the grill or griddle out of the fire for slower cooking or for more ease of use. 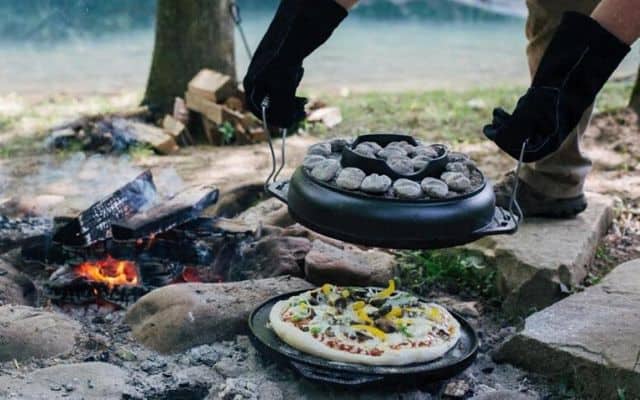 If you are looking for some recipes that you can cook on your grill/griddle plate check out some of our favorites below.

While our favorite cast iron skillet with lid is the Lodge Cast Iron Cook-It-All Kit we understand due to its sheer size and weight which is almost 30 pounds of cast iron, that this large cooking system might not be a great fit for every camper or for someone looking for a more simple or basic cast iron skillet.

Because of this, we have included a few of our favorite cast iron skillet with lid runner ups that are a little less bulky and offer a more simple design. 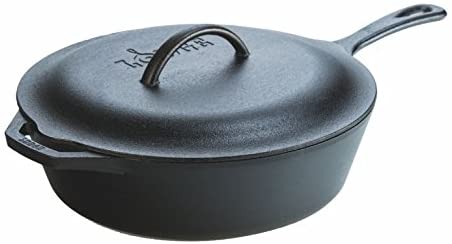 While this skillet does not have quite as much versatility as the one above you can still do a variety of cooking inside the skillet including frying, sauteing, broiling, and baking.

To check the price of this deep cast iron skillet with lid on Amazon click here. 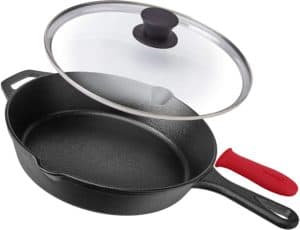 This cast iron skillet with glass lid by Cuisinel is one of the more popular options when it comes to skillets, coming in three different sizes including an 8-inch, 10-inch, and 12-inch version.

One unique feature about this cast iron skillet with lid is that the lid is made from tempered glass instead of the usual cast iron.

While obviously, you do need to be careful with glass around the campsite, this glass lid offers some unique advantages over the more common cast iron lid including lighter overall weight, providing a clear viewing window into the skillet, and allowing you to check on the food without having to lift the lid, preserving the heat inside.

This cast iron skillet by Cuisinel is also pre-seasoned so it is ready to right out of the box and comes with a large main handle with silicone cover as well as sturdy and reliable helper handle on the front of the skillet for safer two-handed maneuvering.

To check the price of this popular cast iron skillet with a glass lid on Amazon click here. 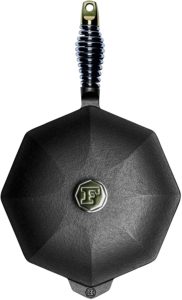 One of the first things you notice about this unique cast iron skillet with lid is its octagon shape and while you might think that this is merely for aesthetics, it actually provides a very real and unique benefit over the more common round skillet, by providing multiple pours spouts around the skillet.

The second unique feature about this cast iron skillet is its main handle which is wrapped in coiled stainless steel that helps to keep the handle cooler longer by not allowing as much heat to transfer from the hot skillet to the handle itself.

This skillet with lid by FINEX is also just a really solid and reliable piece of cast iron cookware.  As this cast iron skillet comes pre-seasoned and ready to go, comes in both a 10-inch and 12-inch version, and has a thick base and sidewalls for consistent and reliable heat.

To check the price of this unique cast iron skillet with lid on Amazon click here.