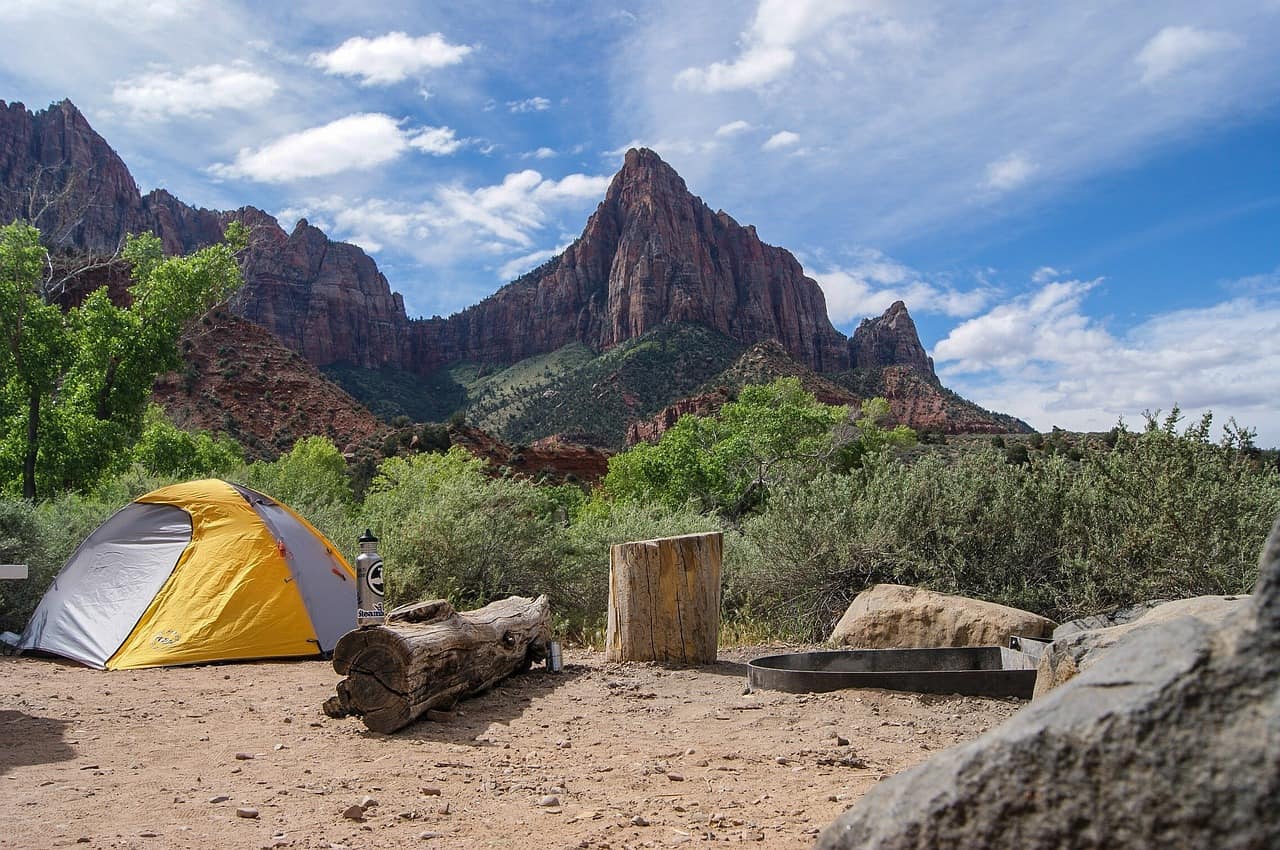 Evaporative coolers are a great alternative to air conditioners because they require far less electricity and use a much simpler cooling process that doesn’t require harsh chemicals such as freon.

But is it possible to use an evaporative cooler while camping and does it work inside a tent?

When camping in arid and dry climates an evaporative cooler will work in a tent, substantially reducing the ambient temperature by as much as 10 to 20 degrees.

However, if you’re camping in an area with relatively high humidity, such as the southeast an evaporative cooler will not effectively cool the inside of a tent.

For more information on how evaporative coolers work and why this can affect their level of efficiency, keep reading.

How Does an Evaporative Cooler Work?

Evaporative coolers or swamp coolers, as they are sometimes referred to, work based on the fact that air temperature decreases when water is evaporated into it.

As evaporative coolers reduce the ambient temperature by using a mechanical fan to draw warm air into the unit, which then passes over water-soaked pads, in order to turn the liquid into a gas, which it then blows out as cool air.

This means that all an evaporative cooler is really doing is just speeding up a naturally occurring process through artificial means.

How Effective are Evaporative Coolers?

Due to the fact, that evaporative coolers use the process of evaporation to cool the air.

The relative level of humidity in the air will have the biggest impact on its effectiveness.

Because the more humid the air is, the less water the air will be able to absorb.

Which will reduce the amount of water that an evaporative cooler will be able to introduce into the air to cool it.

To illustrate this point, take a look at the below table.

Which shows how the relative humidity in the air, affects the number of degrees an evaporative cooler can reduce the ambient temperature.

As you can see from the above table, the higher the relative humidity, the less effective an evaporative cooler is.

However, it is worth pointing out that even at 50 percent relative humidity and above, evaporative coolers can still cool the air to some degree, it’s just less effective.

When You Should Use an Evaporative Cooler in a Tent

Whether you should use an evaporative cooler inside a tent depends largely on what area of the country you’re camping in.

As dry and arid climates with relative humidity below 50% will offer the maximum benefit and cooling effects from an evaporative cooler, which are highlighted in the map above in red and dark orange.

So areas of the country where it makes the most sense to use an evaporative cooler inside a tent include states in the southwest and west such as Nevada, Arizona, Colorado, and California.

However, there are some states in the northwest and even midwest that have low enough relative humidity to receive some of the cooling benefits of an evaporative cooler including Iowa, Arkansas, and even parts of Illinois, which are highlighted in the map above in yellow.

But what if you plan on camping in an area with high humidity marked in blue on the above map?

Does that mean you’re out of luck and destined to sleep in a hot and stuffy tent all night long?

The good news is no because while an evaporative cooler won’t work well to cool a tent down in high humidity, you can utilize a portable air conditioner in these instances.

Best Evaporative Coolers to Use In a Tent

If you plan to use an evaporative cooler inside a tent, it’s best to focus on more portable and compact options that use less energy.

As these types of evaporative coolers will be best suited for use in a tent while camping.

So to help you narrow down your search, we’ve listed some of the best evaporative coolers for tent camping. 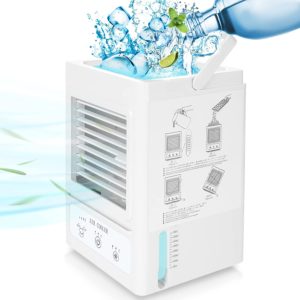 One of the most popular portable evaporative coolers on Amazon is the Batlofty Battery Operated Evaporative Air Cooler, which can provide cool air both inside and outside.

This portable evaporative air cooler also features numerous upgrades and features including a 120-degree auto oscillating fan, multiple cooling modes, and a large 700ML water tank, which allows the unit to run for up to 12 hours on a single tank of water. 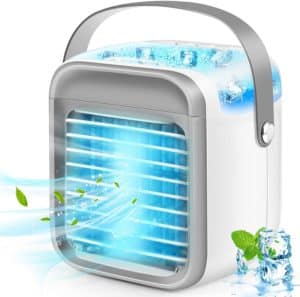 Another popular portable evaporative cooler for tents and camping is the iBaste Rechargeable Portable Evaporative Air Cooler, thanks to its compact portable size and 2000mAh rechargeable battery, allowing it to run for up to 5 hours on a single charge.

This evaporative cooler also offers numerous convenience features such as a three-speed fan, a 7-color night light, and a built-in handle, making it super easy to carry and move around inside the tent. 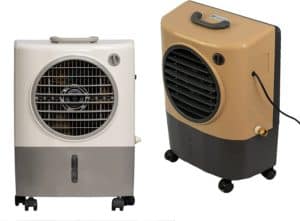 While battery-powered evaporative coolers offer the most portability, thanks to their built-in battery and compact size.

And the Hessaire MC18M Portable Evaporative Cooler is one of the best examples of this.

Because while it is much larger and does require 120v AC power to run, it offers far more cooling power compared to smaller battery-powered evaporative coolers.

Offering 1,300 cubic feet per minute of cooling power and the ability to cool down up to 500 square feet.

But even with all this power, it’s still very portable, thanks to its built-in heavy-duty casters and lighter weight of only 16 pounds. 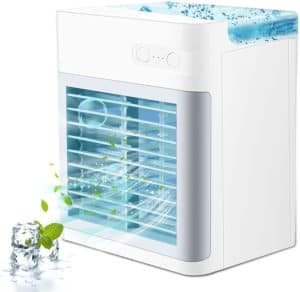 One of the cheapest, lightest, and most compact evaporative coolers you can buy is the Auka Portable Evaporative Personal Air Cooler.

But despite its affordable price and compact size, this unit won’t be a good fit for everyone.

As this evaporative cooler from Auka requires an external battery pack, which is not included if you want to run it outdoors or inside a tent.

Which adds additional cost to this evaporative cooler and can make it a little cumbersome and awkward to move it around, since the battery is not built-in to the unit.

One advantage though of this external battery setup is that you’re not limited to the battery size installed by the manufacturer, which ultimately dictates its run time.

As you are able to connect this evaporate cooler to any size battery pack as long as the power supply is at least 2 amp. 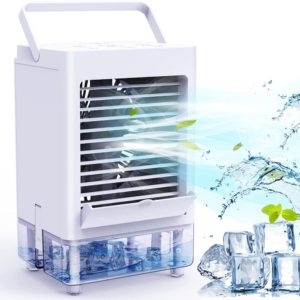 Another great option if you’re looking for an evaporative cooler with a built-in battery is the FOC ONDOT Battery Operated Evaporative Air Cooler.

As this battery-powered evaporative air cooler has a built-in 5000mAh battery, which is capable of running the unit for up to 8 hours, when on the lowest setting.

Giving this portable evaporative cooler the ability to run all night long even on battery power.

Another unique feature of this particular evaporative cooler is its clear water reservoir on the bottom of the unit, which allows you to visually see when the unit is running low on water and needs to be refilled. 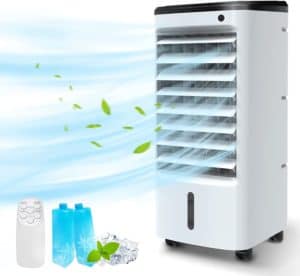 The last portable evaporative cooler on this list is the larger and more powerful BREEZEWELL 3-IN-1 Portable Evaporative Air Cooler.

Which does require 120V AC to run but still allows for easy transport when camping, thanks to its more compact size, lighter weight, and built-in casters.

And the great thing about this portable evaporative cooler from BREEZEWELL is that it’s loaded with features including a 65-degree oscillating fan, remote control with a 20-foot range, a 12-hour timer, and a large 1-gallon dual water tank, which allows the unit to run all night long while you sleep without running out of water.

For even more information on the best ways to cool and air condition a tent while camping, make sure to check out our article “Tents with AC Ports and How to Air Condition a Tent“.