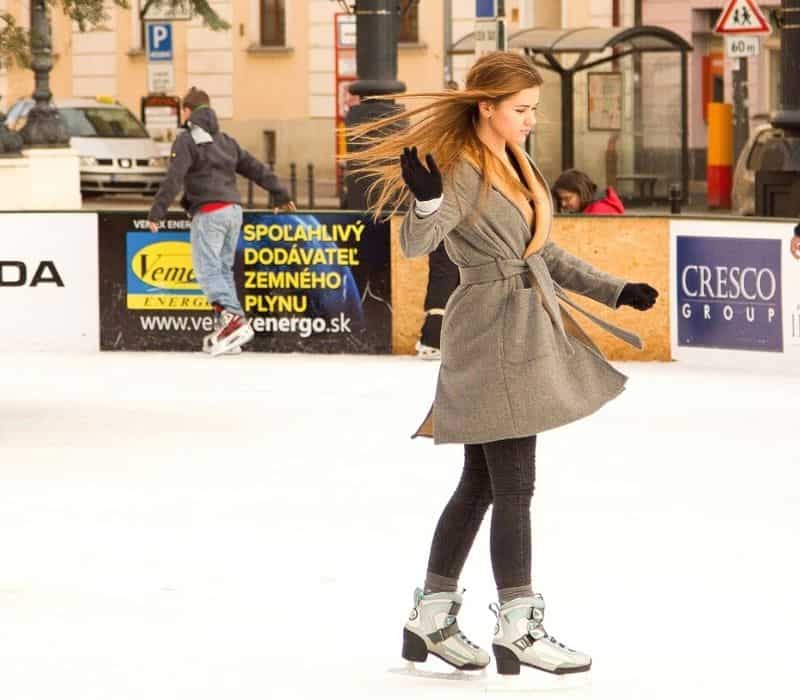 More than 10 million people participate in ice skating each year for a variety of reasons including recreation, exercise, and competitive sport.

But if you’re new to ice skating, you probably have a few questions about ice skating and ice skates.

So to help clear up any confusion, we’ve provided answers to 12 of the most common questions around ice skating and about ice skates below.

How Much Is it Per Person to Ice Skate?

Ice skating rinks will usually charge between $10 and $14 per person, for their open public sessions intended for the general public, which includes the cost of skate rental.

However, some ice skating rinks will break the cost down into two separate fees as opposed to one set price, and charge an admittance fee and a separate skate rental fee.

Which can be preferable if some of your party doesn’t plan on skating.

But regardless of whether the ice skating rink chooses to charge one all-inclusive fee or two separate fees, the overall cost should still be between $10 and $14 per person.

This means that it cost about as much to spend the afternoon at your local ice skating rink, as it does to go the moves.

And that a family of four will typically spend between $40 and $56 depending on whether their local ice skating rink is on the low or high side when it comes to pricing.

However, it’s worth noting that if you’re planning a group outing or a birthday party, most ice skating rinks will usually offer some sort of group discount, where you might be able to get anywhere from $2 to $4 off general admission per person.

To see other costs associated with ice skating and figure skating, including how much ice skating lessons cost, be sure to check out our article “Is Ice Skating Expensive? Answered With Cost Breakdown”

Are Ice Skates the Same Size as Shoes? 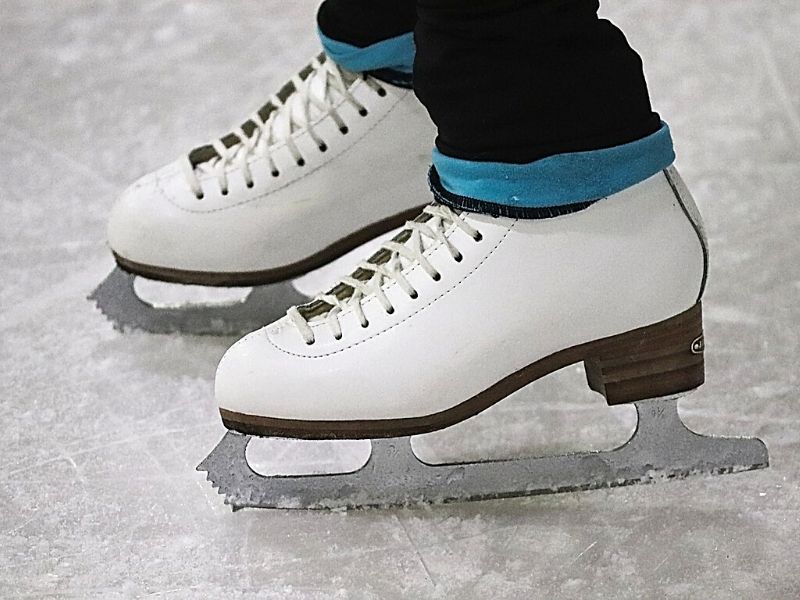 So how are you supposed to know what size ice skate to go with?

If your renting a pair of ice skates from your local ice skating rink, a good rule of thumb is that you should ask for a pair of skates that are one full or half size down for your regular shoe size.

Keeping in mind that the skate should fit snuggly to offer the appropriate support needed for ice skating and that your toes should be touching the end of the skate but not be crunched.

If you are buying a pair of ice skates though, you should first measure both the length and width of your feet.

And then use the sizing chart from the brand of ice skates you are buying, to determine the appropriate size.

As all major ice skate brands offer a sizing chart that allows you to use the measurements of your foot to determine the appropriate size ice skates.

Such as the below sample ice skate size chart.

How Long Does It Take to Learn Ice Skating?

Most people learning how to ice skate will typically need anywhere from a few hours to as many as four or five hours to get a handle on the basics of ice skating, which include maintaining balance, pushing off, stoping, striding, gliding, and turning.

This means that most people should be able to pick up the basics of ice skating after spending an afternoon at their local ice skating rink.

However, it’s important to keep in mind that there is a big difference between cautiously navigating around your local ice skating rink trying to stay upright and becoming proficient at ice skating.

As there are many levels of proficiency when it comes to ice skating, starting with the beginner or novice and progressing all the way up to the Olympic athlete level.

So while you can learn the basics of ice skating in a few hours, it takes much longer to become proficient at ice skating and to truly be comfortable on the ice and with your ice skating abilities.

Which typically requires weeks of practice and usually involves structured lessons with an ice skating instructor.

For even more information on how long it takes to learn how to ice skate and for tips to make it easier, check out our article “Is Ice Skating Hard to Learn? (12 Tips that Make it Easier)”.

Encompassing a wide range of injuries, ranging from everything from ankle sprains and wrist injuries to fractures and head injuries.

However, it’s important to keep the risk of ice skating in perspective.

Because while an average of 50,000 ice skating injuries do occur each year.

When you factor in that more than 10 million people participate in ice skating each year, this 50,000 number doesn’t seem quite so scary.

Which means you only have a .005 chance of being injured while ice skating, which from a statistical standpoint is very very low.

For more information on how dangerous ice skating is as well as what the most common injuries are while ice skating, check out our article “How Dangerous is Ice Skating? (Most Common Injuries)”.

Are Ice Skates Supposed to Be Sharp?

Ice skate blades should be sharp enough to ensure the blades will bite into the ice while turning and stopping and should never be dull, which is why it’s common practice to sharpen ice skate blades.

Because in order for ice skates to have the maximum level of effectiveness on the ice, they need to have razor-sharp edges free of burs and nicks.

What most beginner skaters don’t realize though, is that ice skates actually have two separate edges instead of just one.

As ice skate blades are actually concave on the bottom instead of flat, with a hollow space between the inside and outside edge of the blade, which can be thought of as a radius if you imagine a circle sitting inside that hollow space. 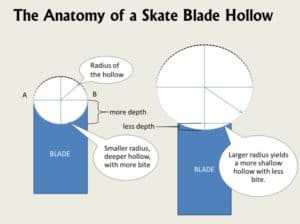 There’s not just one size of hollow though when it comes to ice skates and hockey stakes, as the hollow can vary depending on the desired performance of the blade. 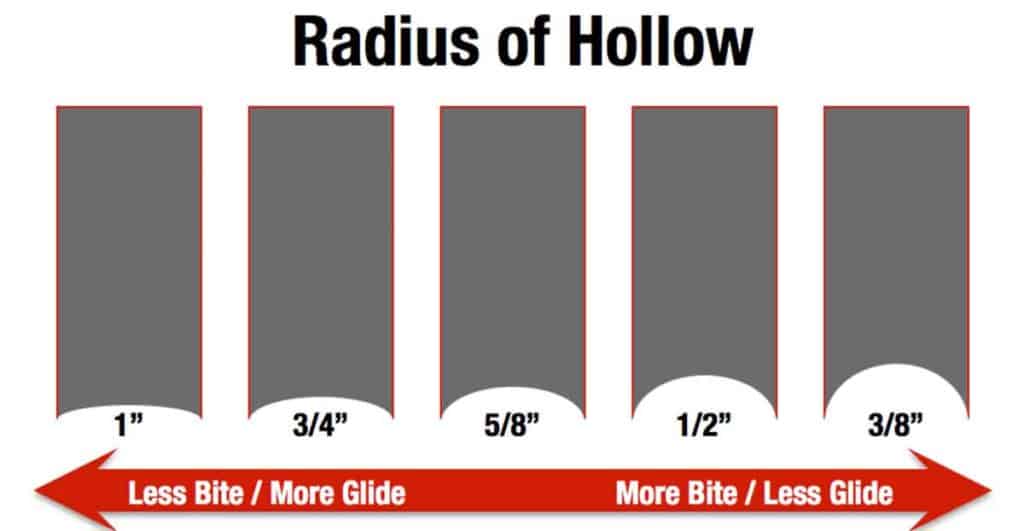 So when you’re talking about how sharp ice skates should be, it’s important to remember that both the inside and outside edge of the blade needs to be sharp for maximum effectiveness.

Can Ice Skates Cut You?

A razor-sharp ice skating blade is definitely sharp enough to cut soft tissue and skin if enough force is applied.

So a certain level of caution needs to be exercised around sharp ice skate blades, as they can cause both cuts and lacerations to the skin.

However, if you were to softly touch the ice skate blade or lightly feel the edge of the blade, it’s unlikely that it would break the skin.

How to Sharpen Ice Skates?

While there are small handheld skate sharpeners on the market today that can freshen up the edges of your blades, in order to properly sharpen your skates, you need to take your skates to a local pro shop or skate shop to have them professionally sharpened.

As they will have the expertise and the large and expensive skate sharpening machine needed to properly and professionally sharpen ice skates.

However, for those that are curious about how ice skates are sharpened, we’ve included the above YouTube video that shows the entire process involved in sharpening ice skates.  (To skip directly to the skate sharpening portion of the video, skip to the 4:35 mark in the video.)

While the cost of skate sharpening can vary from one skate shop to the next.

Most pro shops will typically charge between $10 and $15 to sharpen previously sharpened skates and between $15 and $20 to sharpen new skates that have never been sharpened before.

Can You Sharpen Ice Skates at Home?

Nothing takes the place of having your skates sharpened professionally at your local pro or skate shop, as this will always give the best edge and hollow for skating.

However, there are some at-home skate sharpeners that you can use, which will help freshen up or restore the edges of your blades between professional skate sharpening.

But again these at-home skate sharpeners should never be used as a replacement to professional skate sharpening.

When Do Ice Skates, Need to Be Sharpened?

Ice skates should generally be sharpened after every 20 hours of use for the best performance.

So if you want to keep the best possible edge on your ice skates, you should ideally be tracking your ice skating hours, to know when it’s time to get them sharpened again.

However, keeping a log of skating hours can be hard to keep up with and remember, so most skaters just try to keep a rough idea of how long it’s been since their last sharpening or will mark on a calendar when they had their skates sharpened last to know how long it’s been.

But regardless of which way you choose to keep track of when to sharpen your skates if you start to notice you’re losing control or performance on the ice, it’s definitely time to have your skates sharpened again.

Are Ice Skates Supposed to Be Tight?

Ice skates need to be tight in order to provide the proper support for your feet and ankles while ice skating.

But there is such a thing as too tight, as you don’t want your skates so tight that they are cutting off circulation.

So when lacing up your ice skates or hockey skates you want the skates to be tight enough that your foot is secure and not moving around inside the skate but not so tight that it causes your foot to fall asleep.

How to Properly Fit and Tie Figure Skates

If you’re having a hard time getting your lacing tight enough, you might want to consider using a lace tightener, which allows you to use a metal hook and handle to tighten the laces instead of just your fingers, giving you much more leverage for tightening laces.

How to Properly Fit and Tie Hockey Skates

However, there are a few key differences as hockey skates typically do not have hooks for lacing and do not lace up as far as figures skates.

How Much Do Ice Skates Weigh?

While there are many factors that can affect the weight of ice skates, including what type of skate it is, its construction, price point, and features.

The Radius of a Hollow – Salem Skates

link to How Much Do Ice Skates Cost? Answered (18 Examples)

Ice skating is a fun and affordable activity the whole family can enjoy, as a skating session at your local ice skating rink will typically cost between $10 and $14 per person, which includes the...